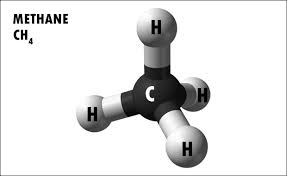 Methane is a chemical compound with the chemical formula CH4 (one atom of carbon and four atoms of hydrogen). Methane is a tetrahedral molecule with four equivalent C–H bonds. The most notorious producer of methane is livestock, specifically cows. It is a group-14 hydride and the simplest alkane, and is the main constituent of natural gas. The relative abundance of methane on Earth makes it an attractive fuel, although capturing and storing it poses challenges due to its gaseous state under normal conditions for temperature and pressure. Natural occurring methane is found both below ground and under the sea floor, and is formed by both geological and biological processes. The largest reservoir of methane is under the seafloor in the form of methane clathrates. When methane reaches the surface and the atmosphere, it is known as atmospheric methane. The Earth's atmospheric methane concentration has increased by about 150% since 1750, and it accounts for 20% of the total radiative forcing from all of the long-lived and globally mixed greenhouse gases. Methane has also been detected on other planets, including Mars, which has implications for astrobiology research. Methane is used as a fuel for ovens, homes, water heaters, kilns, automobiles, turbines, and other things. Activated carbon is used to store methane. Gaseous methane is also used as a rocket fuel when combined with liquid oxygen, as in the BE-4 and Raptor engines. Refined liquid methane is used as a rocket fuel.