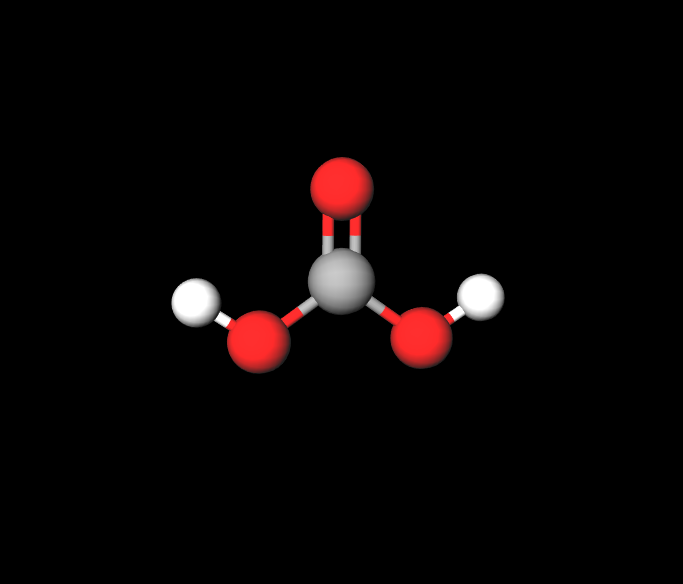 I’ve chosen carbonic acid, which is a weak inorganic acid. It’s a combination of the molecules CO2 and H2O and it only exist in solution. The chemical formula for carbonic acid is H2CO3 and it’s part of the carboxylic acid group, characterized by the -COOH that’s attached to the molecule. Carbonic acid also has two hydroxyl groups, characterized by the -OH located on either end of the molecule. While carbonic acid is diprotic due to its two hydrogen molecules, it’s a weak acid since the O-H bond is so strong and basic. Even though it could Hydrogen bond with its oxygens and their lone electron pairs and be soluble in water, carbonic acid it’s mostly insoluble due it’s symmetrical molecular geometry and its non-polar polarity. When it does dissociate, carbonic acid breaks ups into H+ and HCO32- ions. Carbonic acid can occur in nature in areas like the body, and it occurs industrially in objects like carbonated drinks. In the body, blood cells that contain CO2 combine with water to form carbonic acid as part of the respiratory system, which is then released as a gas through exhalation due to the lungs. Carbonic acid is also found in natural formations such as coal, meteors, volcanoes, ground water, oceans, and plants. It also can be found in harmful substances such as acid rain. Carbonic acid, however, is mainly known for its uses in “sparkling” or carbonated drinks. Take, for instance, drinks like sparkling grape juice, cola, creams sodas, and sparkling lemonades. Carbonic ac