Caffeine: The Drink of Work 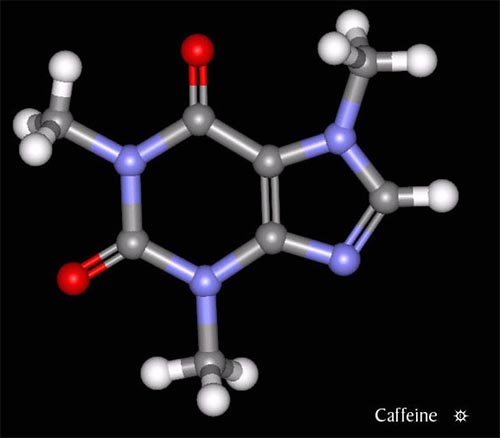 Whether you are burning midnight oil, working hard at the office, or wanting a good cup of coffee, caffeine always helps you stay awake. It is the most widely used drug as its stimulating properties are used by more than half the population in the United States and most of the population throughout the world. I chose Caffeine because of the ever spreading popularity of caffeinated drinks such as some sodas and coffee and how it affects the people positively and negatively. I did this project to spread awareness of this molecule and how it has some pros and cons. Caffeine is made up of 8 Carbon atoms, 10 Hydrogen atoms, 4 Nitrogen Atoms and 2 Oxygen atoms. Caffeine is a methyl xanthine and the molecule is similar to that of Theobromine in chocolate. Pure Caffeine is a white, bitter, crystalline powder and plants produce this to deter pests and halt the germination of nearby seeds. Some of the pros of Caffeine are that it can reduce the risk of Type II Diabetes Mellitus, it can cure some types of headaches, and that it can boost concentration for a while. However, some of the negatives of Caffeine is that it can cause a hard time sleeping after overconsumption as it can lead to jitteriness, heart palpitations, and/ or nausea. Although Caffeine has its positives, it should be regulated. The daily amount that adults are allowed to consume of Caffeine is 400mg, or about four cups of brewed coffee. Thank you very much for taking the time to read this and for the great opportunity!