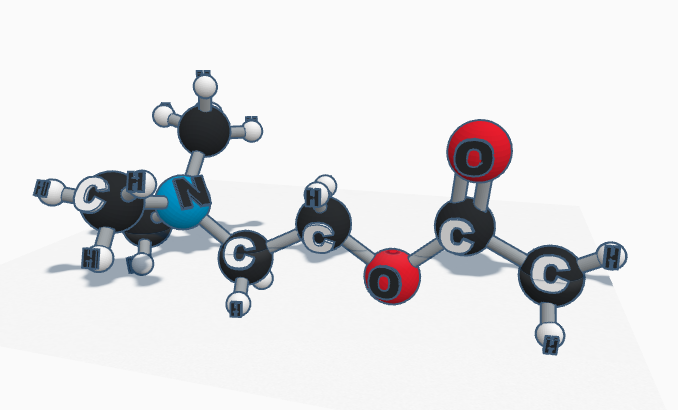 Acetylcholine (ACh) is an ester of acetic acid and choline, which makes up the neurotransmitter that is used in our central and peripheral nervous systems. Unlike other neurotransmitters, the acetylcholine molecule is a non-monoamine subtype, which means that acetylcholine does not consist of an amino group that is connected to an aromatic ring by a carbon chain. Acetylcholine is formed through choline, which is in the B-complex group of vitamins, and the precursor of choline, which is Acetyl-Coenzyme A (AcCoA). The molecular formula for this molecule is C7H16NO2, meaning it’s composed of seven carbon, sixteen hydrogens, one nitrogen, and two oxygen. The most important role of acetylcholine consists of a neurotransmitter that is responsible for releasing nerve cells that send signals of our learning, memory, thinking, and muscle contraction. Without acetylcholine, we would not be able to perform such actions that lead us to become who we are.