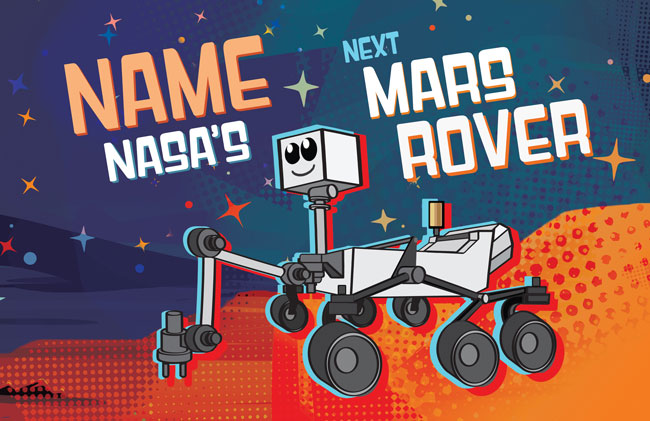 NASA has selected two partners to run a nationwide contest giving K-12 students in U.S. schools a chance to make history by naming the Mars 2020 Rover. An application to become a judge of the contest also is now available online.

Future Engineers, of Burbank, California, and Battelle Education, of Columbus, Ohio, will collaborate with NASA on the Mars 2020 "Name the Rover" contest, which will be open to students in Fall 2019. The student contest is part of NASA’s efforts to engage the public in its missions to the Moon and Mars.

By focusing the Mars 2020 "Name the Rover" contest on K-12 entries, NASA seeks to engage U.S. students in the engineering and scientific work that makes Mars exploration possible. The Mars 2020 "Name the Rover" contest will be hosted on Future Engineers' web platform, which will serve as the online portal for entry submission and judging. Battelle will help recruit judges and students and also curate resources for teachers.

"We're very excited about this exceptional partnership," said George Tahu, Mars 2020 program executive in NASA's Planetary Science Division at the agency's Headquarters in Washington. "Contests like this present excellent opportunities to invite young students and educators to be a part of this journey to understand the possibilities for life beyond Earth and to advance new capabilities in exploration technology."

The currently unnamed rover is a robotic scientist weighing more than 2,300 pounds (1,000 kilograms). It will search for signs of past microbial life, characterize the planet's climate and geology, collect samples for future return to Earth, and pave the way for human exploration of the Red Planet. The spacecraft is targeted for a July 2020 launch and is expected to touch down on Mars in February 2021.

JUDGES NEEDED
K-12 students are not the only ones able to participate in the contest. NASA, Future Engineers, and Battelle also are seeking volunteers to help judge the thousands of contest entries anticipated to pour in from around the country. U.S. residents interested in offering approximately five hours of their time to review student-submitted rover names may visit the Future Engineers website and register to be a judge: