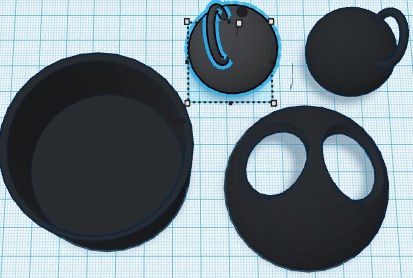 The Egg Cooker is a design to help astronauts cook eggs. First, assemble the Egg Cooker by placing the the half circle with holes on to the cylinder. Next, grab an egg and place both hands in with the egg. After that, crack the egg. You might be thinking that the yolk will just float out of the jar. But, when you cracked the egg get the yolk out of the egg. Then, take your hands out of the cooker and quickly place the caps on the holes so the yolk doesn't float away. Now, there is no gravity in space, so before cooking the egg pull the cooker up until the egg is stuck to the bottom surface for the egg to cook properly. If you need to flip the egg or take the egg out take off the lid. The lid is the half circle with holes. The caps are the circles with handles. The next thing is critical to know. If you change the color from black, it won't get as much heat.