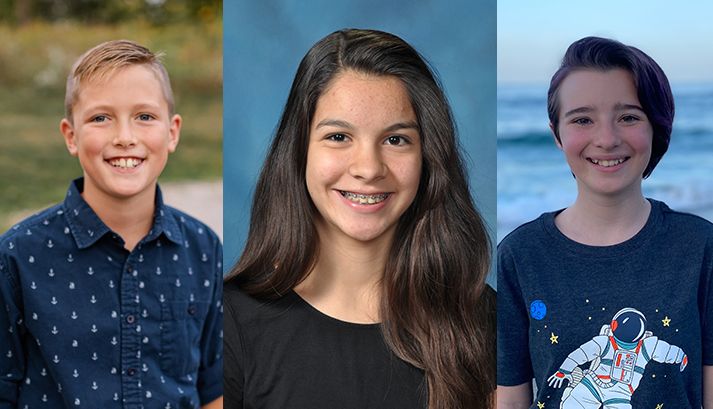 NASA has named three students the winners of the Artemis Moon Pod Essay Contest for their creative visions of a pioneering journey to the Moon. Nearly 14,000 students entered the contest, each competing for the grand prize: a trip to NASA’s Kennedy Space Center in Florida, where they will witness the first launch of the Artemis era.

NASA invited students to envision themselves leading a crew, or “pod,” on a mission to the Moon’s South Pole, and capture these ideas in their essays. NASA and Future Engineers launched the contest in September 2020 for K-12 students nationwide. The contest’s goal was to encourage the Artemis Generation – kids growing up during the era of NASA’s return to the Moon – to think ahead about the human and technological needs of a lunar expedition.

Students across the nation wrote essays to share their visions of a weeklong mission to the Moon’s South Pole. Over 1,000 educators, professionals, and space enthusiasts served as volunteers for the first round of judging, and selected 155 semifinalists in March 2021. The list was narrowed further to nine finalists in April. A panel of four NASA judges conducted virtual interviews with the finalists about their essays and ideas before choosing the three winners.

Pritts’ essay, “My Mission to the Moon,” tells the tale of a daring Moon Pod crew consisting of a test pilot/navigator, chemist, and mechanical engineer who establish a permanent lunar research facility powered by Kilopower Reactor Using Stirling Technology (KRUSTY).

In “One Week on the Moon – The Artemis Adventure,” Saurer’s vision for the Moon Pod mission calls for a four-person crew – including the first woman to step onto the Moon – to build a habitat for future astronauts using a combination of lunar soil and a fibrous fungal material called mycelium.

Gutierrez’s composition, “Dream Big Moon Pod,” follows the adventure of a three-person crew of a chemist, hydrologist, and astronautical engineer as they install an Endothermic Electrolysis Reactor (EER), designed to provide fuel and oxygen for future crews at the Moon’s Shackleton Crater.

The contest was a collaborative effort between NASA’s Office of STEM Engagement and the Human Exploration and Operations Mission Directorate, in partnership with Future Engineers.

Through Future Engineers, the grand prize winners will have the opportunity to travel with their families to NASA’s Kennedy Space Center in Florida to see the first launch of NASA’s Space Launch System rocket and Orion spacecraft during the uncrewed Artemis I mission. On this first flight of the Artemis program, the Orion spacecraft will travel beyond the Moon, nearly 280,000 miles away from Earth – farther than any spacecraft built for humans has ever traveled – during a three-week mission.

The approximately 14,000 essays submitted to the Moon Pod Essay Contest will fly on a USB flash drive aboard Artemis I, and NASA has provided each student who participated a signed digital certificate, which is downloadable via the Future Engineers platform. Each semifinalist will get the chance to learn even more about Artemis through a series of virtual Artemis Explorer Sessions with NASA experts, along with an Artemis prize pack filled with fun educational materials. The contest’s nine finalists also will have the chance to travel with a parent to the agency’s Johnson Space Center in Houston to learn more about lunar exploration.